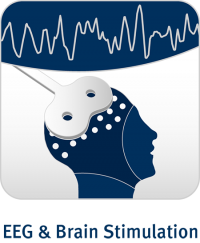 Transcranial magnetic stimulation (TMS) is a non-invasive method for exciting neurons in the brain. The excitation is caused by electric currents induced in the tissue by rapidly alternating magnetic fields (electromagnetic induction). In this way, brain activity may be triggered or modulated without surgery or externally applied electrodes. This technique is used to study the circuitry and connectivity of the brain. Repetitive transcranial magnetic stimulation, known as rTMS, may produce longer-lasting changes in electro-cortical function.

TMS’s major contribution to cognitive psychology and neuroscience is the fact that it can demonstrate causality. Non-invasive mapping techniques such as fMRI allow researchers to visualize which regions of the brain are activated when a subject performs a certain task. This does not in itself constitute proof that those regions are actually used for the task concerned. It merely demonstrates that a specific region is associated with a given task. If activity in the associated region is suppressed with TMS stimulation and a subject’s performance declines or alters on a task, this constitutes much stronger evidence that the region is actually associated with performance of the task.

EEG (or ERP) recording during TMS stimulation is an important technique providing support in the determination of cognitive processes, but it is also a well known technically challenging task. TMS stimulation induces a very strong electrical field that can saturate the recording amplifiers for a long duration. Furthermo­re, even if the amplifier does not reach saturation point, the TMS pulse induces an artifact in the EEG data that can last for hundreds of milliseconds.