Auditory brainstem responses (ABR) or brainstem auditory evoked potentials (BAEP) are early – short-latency – EEG components, evoked by acoustical stimulation. The name refers to the generators: these components are mainly – however not exclusively – originated from the brainstem, relatively far away from the EEG electrodes. Furthermore the ABRs are characterized by small amplitude – below 1 µV – and short latency – five to seven peaks within 10 ms. 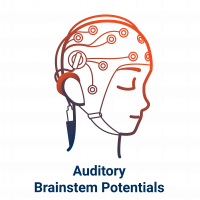 The name refers to the generators: these components are mainly – however not exclusively – originated from the brainstem, relatively far away from the EEG electrodes. Furthermore the ABRs are characterized by small amplitude – below 1 µV – and short latency – five to seven peaks within 10 ms.

The characteristics of the ABRs explain why it is challenging to record them. The auditory stimulus and the corresponding marker must be delivered with high precision. The width of a single component is below 1.5 msec, therefore the smallest jitter of the trigger (stimulus to stimulus variance of the trigger-delay) can easily smear the averaged signal, resulting in lower amplitude or completely missing components. Therefore typically dedicated stimulator devices are used for this purpose. The ABRs are commonly elicited by monaural broad-band click sounds (monophasic square pulses of 100 µs duration). The intensity of the stimulation is high, typically 60-65 dB above the – measured or normal population’s – hearing threshold. The sounds are presented at a rate of about 10 Hz. A typical measurement contains two runs, each consisting of 2000 stimulus repetitions. The second run serves as validation of the first: the latency differences should be below 1%, while the peak-to-peak amplitude variation should not exceed the 15% limit.

Bandwidth of the evoked responses is 100 Hz – 3 000 Hz, therefore EEG amplifier must be capable to digitize the signal with high sampling rate (10 – 20 000 Hz or above,) and offer extremely low signal-to-noise ratio. The subject has only one task during the measurement: be as relaxed as possible. The ABRs are not affected by cognitive processes, like by attention. Similar potentials can be recorded even if the subject is sleeping.

The ABRs can be recorded with different montages, which affect the relative amplitude of the peaks. This explains why a multichannel ABR recording makes it easier to identify the components. Probably the Cz referenced against the ipsilateral – relative to the simulation side – mastoid (or earlobe) is the most commonly used bipolar channel. However further setups, like Cz against the contralateral mastoid (or earlobe) or the contralateral mastoid against the ipsilateral also provide valuable additional information.

Usually the ABRs are presented so, that the positive peaks point upward. According to the Jewett and Willison convention, these positive peaks are labeled with Roman numbers (from I to V or up to VII). The negative components get the N suffix and the number of the previous peak. The peaks indicate activation steps along the auditory pathway starting from the auditory nerve through the brainstem and beyond. Latency and amplitude measurements make it possible to quantify for example the transmission time of the information and many more indexes. Please find further details in dedicated text books and papers.